It’s been over 5 months since the last game, and in that time I’ve managed to start a new job and engage in all the usual summer activities. But with the rain teeming down outside this weekend, I was very glad not to be in a tent or canoe and hijacked the kitchen table in retaliation for Mrs Dog’s annexation of the basement for her weekend course.
Another game, another period/scale combo (15mm Napoleonics) but a return to the plains of North Germany in 1813. Having been forced to retreat north after his defeat by the Prussians at Stavkstadt, General Lebasque needs to locate a river crossing that will enable him to rejoin Davout’s main body. He has sent a scouting force towards the small village of Dreibrücke (clue’s in the name), who are about to discover that the Prussians have got there first.
As per the Sharp Practice 1813 lists, French infantry are lower quality (‘Conscripts & Volunteers’ rather than ‘Regulars’, ‘Skirmishers’ rather than ‘Light Infantry’) so the Prussians have an edge there. To balance the forces under Sharp Practice 2 requires lots of good leaders for the French and plodders for the Prussians. The high rating and musician for the French light cavalry leader is to allow him to control his force, split into four groups per the scenario, as they search for a ford to outflank the Prussians.
Visually this is a bit of a nostalgia trip, with Second Generation Minifigs fighting over Gallia resin buildings. Teenage me may have painted all these forces in Humbrol enamels (sorry if the yellowing, rather glossy, varnish shows up in the pictures) but did not have the foresight to purchase a third Gallia bridge, so a very grand 1/72 Italeri span completes the table.
Read more »
at September 26, 2022 No comments:
Labels: Napoleonics

World War II was probably the dominant conflict in terms of the media, toys and other gamers as I was growing up in the hobby. But apart from a brief excursion in 10mm (using the horrible Skytrex Action 200 range) which went nowhere, I had never got into it personally. Then, just when I had decided that I had all the periods I would ever need, certainly for this project, I suddenly found myself launching into 1944 in North West Europe in 20mm. How the hell did that happen? 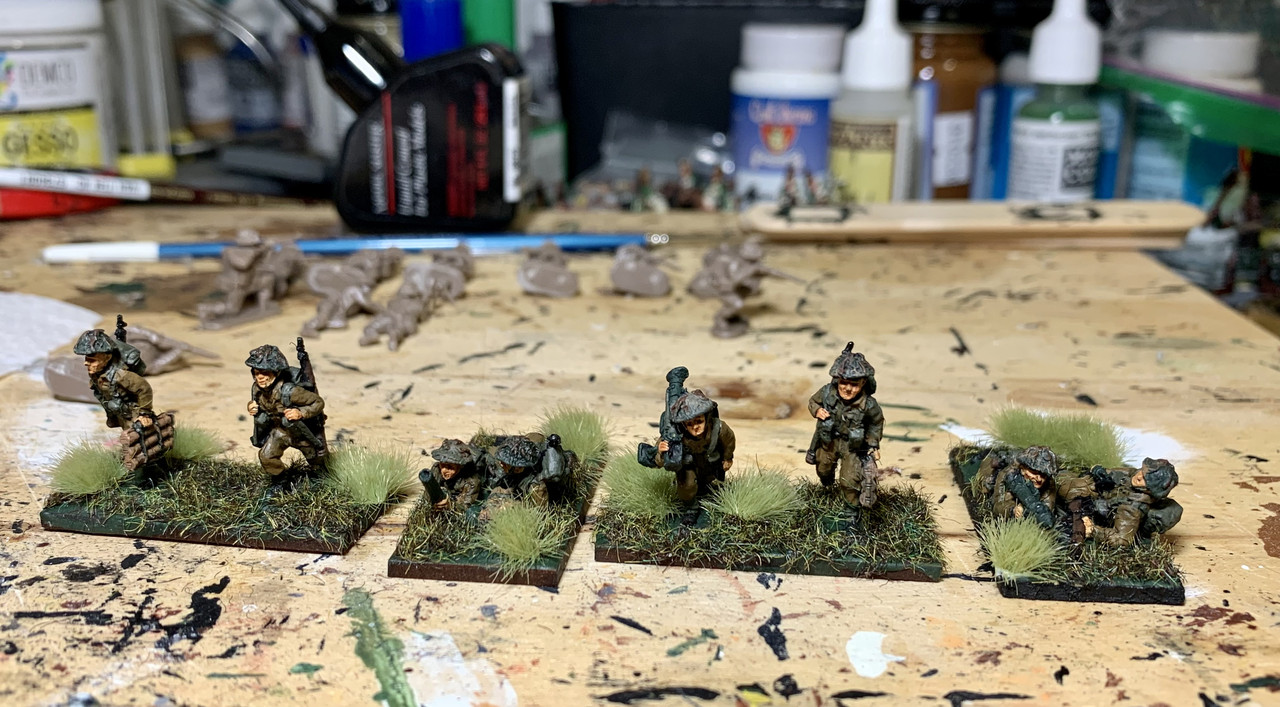 I expect to play most of these scenarios solo. Is this because I am a misanthropic 'Billy No Mates' with poor social skills and poorer personal hygiene?
No.
Is it because I live in the middle of nowhere and have no opponents for miles around?
No.
Is it because I hate to lose and like to have everything my own way?
N...maybe.